The rendering equation is an integral equation with basis in physics. It follows the law of conservation of energy for radiance; the radiant flux emitted, reflected, transmitted or received by a surface.

Normally, when using ray tracing, you’d add lights to your scene to see anything. This is not necessary in path tracing. Any object in the scene can act as an emitter of light. If you add explicit lights, you cannot add point lights because they have no area. The probability to hit a point light would be zero.

A potentially disturbing side-effect of path tracing is noise. The more samples you use, the less noise there will be in the final image. But this takes time. There are many ways to reduce noise, such that less samples are required for approximately the same end result. One way to reduce it, is to use larger light-emitting objects, such as a sky. The probability for a ray to hit a larger object is higher than that of a smaller one.

This blog post will not cover the exact details for an implementation. But some pseudo code will be posted here below, so you can see the overall picture.

Using my own renderer, with code similar to the one above, I produced the following image. It took a few seconds to generate, so you may still see some noise in there. But, had I not used a sky, you’d see a lot more noise. 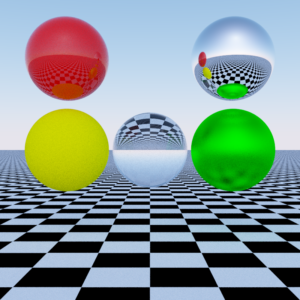